A Medicare Tutorial for Insurance Agents

If you’ve heard Bernie Sanders speak, you know that he would like to expand the Medicare program to all Americans. “Medicare for All” is the proposal, and the idea is that the government’s Medicare program works well for seniors and would be a good replacement for the Affordable Care Act. For brokers who have been selling individual plans through Healthcare.gov or one of the state-based exchanges, it may come as a surprise that any health care program in which the government is involved could run smoothly, but this one has been around for 50 years now and doesn’t appear to be going anywhere. For that reason, and because agents are looking for an alternative to the ACA plans they’ve focused their attention on for the past couple years, we’ve received a lot of requests recently for information about Medicare-related products, so we thought a short tutorial might be in order.

To begin with, Medicare is a government-run health insurance program that was signed into law in 1965 by President Lyndon B. Johnson. Currently, people age 65 or older, people with certain disabilities, and people with End Stage Renal Disease (ESRD) are eligible to participate in Medicare. The program, which is administered by the Centers for Medicare and Medicaid Services (CMS), covers nearly 54 million Americans, and as the baby boomers continue to age, another eight thousand people become eligible for Medicare every single day.

Originally, there were two parts to Medicare: Part A and Part B. Today, this is referred to as “Original Medicare,” and most people find that the protection offered by Medicare A and B is not enough.

Also known as “hospital insurance,” Medicare Part A provides coverage for in-patient hospital care, skilled nursing facilities, home health care, and hospice. We pay for Medicare Part A during our working years through FICA deductions from our paychecks: the employee pays 1.45% of his or her income and the employer matches this amount. High income earners pay an additional 0.9% on amounts over $200k for an individual or $250k for joint filers.

Once a person has contributed to the Medicare program for 40 quarters (the equivalent of ten years) or if he or she is married to someone who has, that individual qualifies for “premium free” Medicare Part A. That means that there will be no cost for Part A when he or she signs up for it, though the payroll deductions will continue as long as the individual is working. For those who do not qualify for premium free Medicare Part A, it can be purchased from the government but is very expensive.

Medicare Part B is also called “medical insurance” and pays for things like doctor visits (both in and out of the hospital) and outpatient services like preventive care, diagnostic tests, durable medical equipment, day surgery, dialysis, radiation, and chemotherapy. Unlike Medicare Part A, which we pay for most of our lives, people pay for Medicare Part B when they sign up for it, usually through monthly deductions from their Social Security checks.

To discourage people from waiting until they get sick to sign up for Medicare Part B, Medicare imposes a penalty of 10% per year for every year an individual was eligible but not enrolled, and this penalty continues for the rest of his or her life. However, there is no penalty for someone who postpones Medicare Part B because he or she has group health coverage based on current employment. Late enrollees can only sign up for Medicare Part B between January and March (for a July 1 effective date), but those with employer-sponsored coverage qualify for a special enrollment period when they lose their group coverage or when they retire.

The problem with Original Medicare is that it doesn’t cover everything—there are some pretty significant holes. For instance, when a Medicare beneficiary goes to the hospital under Medicare Part A, he or she pays an up-front deductible of $1,288, and because this is a “benefit period” deductible and not a calendar-year deductible, it can actually hit more than once in a year. After 60 days in the hospital, there’s a copayment of $322 per day. That amount doubles after 90 days in the hospital, and there’s no coverage at all after day 150. Medicare Part B has an annual deductible of $166, and then the Medicare beneficiary pays 20% coinsurance with NO out-of-pocket limit. Can you imagine selling a group or individual plan with no stop-loss amount? That’s not even legal under the ACA.

Because of all of the gaps in Medicare Parts A and B, many people choose to purchase a Medicare supplement, also known as a Medigap plan. These plans pay secondary to Medicare and fill some of the holes in the Medicare coverage. There are 10 standardized plans, which means that a plan G from one company will fill the same gaps as a plan G from another company.

The price of a Medicare supplement varies by age, location, smoking status, and, of course, by carrier, but a Plan F, which is the most popular because it fills most of the holes in Medicare A and B, starts off at around $150 per month at age 65. Supplements are guaranteed-issue for the first six months after a person signs up for Medicare Part B; after that, the insurance company can decline coverage for new applicants based on pre-existing medical conditions.

Interestingly, Original Medicare does not cover prescription drugs even though seniors take more prescriptions than any other group. In fact, until President Bush signed the Medicare Modernization Act into law in 2003, there was no prescription drug coverage at all under Medicare. Medicare Part D Prescription Drug Plans provide that needed coverage.

Part D plans are not offered by the government; they can only be purchased from private insurance companies. The prices vary depending on the drug formulary, annual deductible, copays and coinsurance, and contracted pharmacies. Many insurance companies offer three Part D options—a low, medium, and high option—all with different prices and benefits. And, as with Medicare Part B, there is a surcharge on Part D plans for higher income individuals. 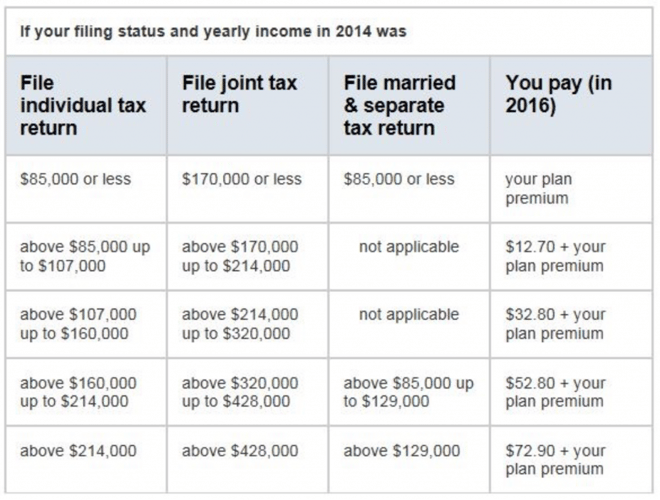 There is also a penalty for anyone who does not sign up for Part D when first eligible unless he or she has other “creditable” prescription drug  coverage through an employer. The penalty is 1% per month for every month the individual was eligible but not enrolled, and the penalty continues for the rest of his or her life.

To qualify for Medicare Part D, an individual must live in the plan service area and be enrolled in either Medicare Part A or Part B. Medicare Part D drug plans can be offered as a stand-alone benefit alongside Original Medicare (with or without a supplement) or can be incorporated into a Medicare Advantage plan, discussed below.

Medicare supplements are great because they fill the gaps in Original Medicare, and Medicare Part D provides much-needed drug coverage for seniors who in the past may have had trouble paying for their prescriptions. Unfortunately, each of these programs has a monthly premium, and people who live on a fixed income often have trouble affording the necessary coverage. For that reason, the government created the Medicare Advantage program.

Medicare Advantage plans are offered by private insurance companies and look a lot like the insurance coverage people may have received from their employer during their working years: most Advantage plans have a contracted provider network, copayments for doctor visits and prescriptions, and deductibles and coinsurance up to an out-of-pocket maximum for the big stuff.

The big advantage of an Advantage plan is that they usually have a low monthly premium (much lower than a Medicare supplement), and some have no additional premium beyond what the person is paying for Medicare Part B. To qualify for an Advantage plan, an individual must live in the plan service area, must have both Medicare A and B, and must not have End Stage Renal Disease (ESRD).

As with Medicare Part D plans, the Annual Election Period (AEP) for Medicare Advantage plans is October 15 to December 7.

Should you sell Medicare-related products?

With the current unpredictability of the individual market, a lot of agents are looking for something else to sell. Medicare Advantage plans, Medicare Part D plans, and Medicare supplement policies are great products to add to your portfolio. The Medicare market is much more stable than the individual market right now, and as more baby boomers turn age 65, it continues to grow.

The money isn’t bad either! Give AHCP a call today and we’ll show you how much you could earn in just a few weeks a year. We’ll also help you with the necessary appointment paperwork and walk you through the certification process for the different carriers.