On June 24, 2019, President Trump signed an executive order that would, among other things, make it easier for consumers to choose an HSA-compatible High Deductible Health Plan, expand the definition of preventive care under this type of plan, and expand the list of HSA-eligible expenses.

While the order, officially called the “Executive Order on Improving Price and Quality Transparency in American Healthcare to Put Patients First,” is focused primarily on increasing transparency in health care, HSA expansion could prove to be a big and positive change for consumers.

It is worth taking President Trump’s executive orders seriously. While Congress has been largely ineffective at passing bills that create meaningful change in health insurance and health care, President Trump’s October, 2017 executive order led to the expansion of short-term health plans, the creation of individual coverage HRAs, and the expansion of Association Health Plans (currently on hold pending appeal). There’s no reason to think that the Department of Treasury will not expand HRAs as the President has requested.

Let’s take a quick look at exactly what the executive order says:

(a)  Within 120 days of the date of this order, the Secretary of the Treasury, to the extent consistent with law, shall issue guidance to expand the ability of patients to select high-deductible health plans that can be used alongside a health savings account, and that cover low-cost preventive care, before the deductible, for medical care that helps maintain health status for individuals with chronic conditions.

It's unclear exactly what the President means when he says “expand the ability of patients to select high-deductible health plans” since consumers currently have this option if available in the individual market or offered as a choice by their employers. Perhaps Treasury could expand the definition of an HSA-qualified “High-Deductible Health Plan” to include plans that provide some up-front coverage for routine care like doctor visits or that have a higher out-of-pocket limit, which in turn would make HSA-qualified plans available to more consumers. We’ll see what the Department of Treasury proposes in just a few weeks.

As for covering “low-cost preventive care, before the deductible, for medical care that helps maintain health status for individuals with chronic conditions,” it appears that the Treasury Department has already fulfilled this request. On July 17, 2019, the IRS released Notice 2019-45, which, according to the accompanying news release, adds “care for a range of chronic conditions to the list of preventive care benefits that may be provided by a high deductible health plan (HDHP).”

At this point, it appears to be an option but not a requirement that health plans cover this list of preventive services and medications prior to the plan deductible. These are not being added to the list of required preventive services under the Affordable Care Act, so they do not have to be covered with no cost sharing on all plans. The decision to provide up-front coverage for more preventive care will, predictably, increase the cost of the plan, so it’s unclear at this point how carriers will respond to the new guidance.

Here is a list from the IRS press release of the new services and items that can be covered as up-front preventive care on an HDHP for individuals with the specified chronic conditions. 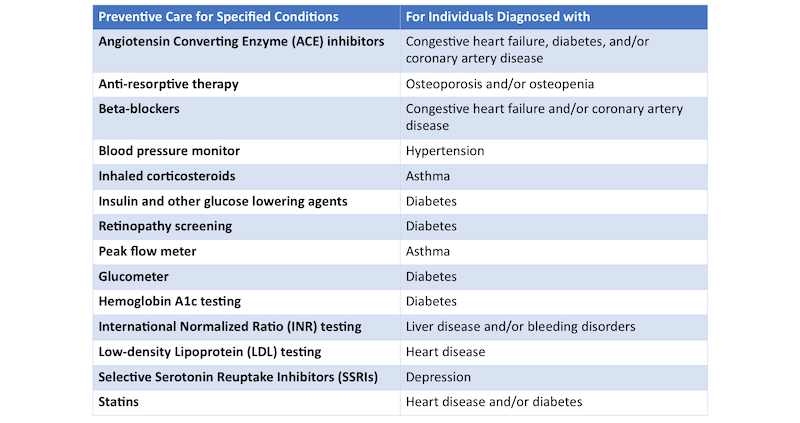 (b)  Within 180 days of the date of this order, the Secretary of the Treasury, to the extent consistent with law, shall propose regulations to treat expenses related to certain types of arrangements, potentially including direct primary care arrangements and healthcare sharing ministries, as eligible medical expenses under section 213(d) of title 26, United States Code.

This is an interesting idea given the rapid growth in recent years of both direct primary care arrangements and healthcare sharing ministries.

Interestingly, the executive order does not ask that people who have joined a healthcare sharing ministry be allowed to set up an HSA, but rather that existing HSA funds be used to pay for expenses related to these arrangements.

As for using HSA funds to pay for direct primary care physicians, this would definitely be a welcome change. It would be even better, perhaps, if consumers in a direct primary care arrangement could choose to exclude doctor visits as an essential benefit on their health plan, which would help to reduce the premium, but that sort of change could not be done through an executive order; it would require an act of Congress.

For many, the executive order does not go far enough. There are a lot of ideas out there to expand HSAs, and many even have bi-partisan support. Take the appropriately named “Bipartisan HSA Improvement Act of 2018” (H.R. 5138). This bill was introduced March 1, 2018 and referred to the House Ways and Means Committee, but according to Congress.gov, no further action was taken. That’s a shame, because it included some good ideas. Here’s a summary from the National Association of Health Underwriters of what the bill would do:

The fact that a bi-partisan bill with so many good ideas never went anywhere is, perhaps, why people are so excited about the President’s executive order. Since no congressional action is required, the ideas in the executive order are likely to become law instead of dying in committee. We’ll let you know when it happens.

What Trump's Executive Order on the ACA Means
Read