Health Insurance Market Dominated by a Handful of Carriers

Those who oppose the single-payer health insurance plan promoted by Bernie Sanders in his 2016 presidential campaign, and supported by most Democratic candidates in the 2020 race, often argue that competition is good for the market; it helps improve quality and reduce costs because consumers shop with their wallets. Many insurance agents would agree with this assessment: competition, in most cases, is good for consumers. However, what is often left unsaid in the conversation about competition in the health insurance industry is that it doesn’t really exist, at least not to the extent that we would like to believe it does.

A recent article in Health Payer Intelligence details a study by the Government Accountability Office which found that, in 37 states, the three largest payers hold 80 percent or more market share. While that isn’t a monopoly and we don’t (yet) have a “single-payer” system in this country, it does seem to meet the definition of an oligopoly. Economics Online defines oligopoly as “a market structure in which a few firms dominate,” and economists will tell you that this sort of system, while relatively stable, does not necessarily result in lower prices for consumers. In fact, just the opposite is true: according to Investopedia, “an oligopoly can block new entrants, slow innovation, and increase prices, all of which harm consumers.”

Here are a few stats from the GAO report: 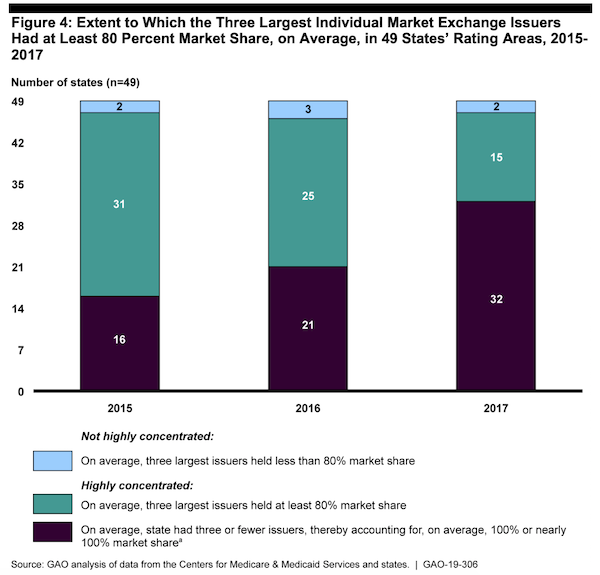 What does this mean for brokers?

If you’ve been frustrated by the lack of options available to your individual and small group clients, this report does show that you’re not alone—in most areas, there aren’t a lot of options.

The good news, though, is that there are a number of different strategies that you can offer your clients. For instance, healthy individuals may find short-term health insurance or even a Health Care Sharing Ministry to be a more cost-effective option than an ACA-compliant individual plan. Small employers may want to consider level-funded plans as an alternative to fully-insured, ACA metallic plans. And, in areas where the individual market is competitive, the new individual coverage HRAs, available January 1, 2020, may be worth considering.

The key is to learn as much as possible about not only the insurance coverage options available in your market but also the different strategies that may be a fit for select clients. That way, no matter your client’s characteristics or circumstances, you will be able to recommend the most cost-effective solution available to them.

One final takeaway: With only a limited number of options available, the chance that you will lose business to a competitor recommending a solution that you haven’t already discussed with your clients is pretty low.

Analyzing the CBO Score: Will 23 Million Really Lose Coverage Under the AHCA?
Read